A non-DS related post for a change. Today I’m listing six things that float my boat because Hammie told me to. Then apparently I’ve got to nominate five others who have to do something similar. Hmmm. Is this what memes are? (Incidentally, if you haven’t yet been hammified, you should.)

I’ve tried to avoid the obvious things that I love like family and world peace and completing my collection of Horst Bucholz movies, and apologies in advance for dragging those linked below into this. The least you can do, dear reader, is call in on them and offer some sympathy and have a rummage in their wildly different but similarly excellent drawers of stuff.

Can’t imagine life without it. I worship good lyrics. Get tickled when I discover a new meaning after listening to an album for ten years. Sometimes, with particular favourites, I can listen all the way through but only to a specific instrument, or just the harmony voice. R&B (what a ridiculous hijacking of a name) and metal are out. Other than that it’s open season, from The Blue Nile to Marvin Gaye to Schubert to The Red Hot Chilli Peppers. I’ve read that 80% of sensory input comes in through the eyes. Hmph. Feed your ears here or here or here.

The sound that ten thousand running shoes make is a sort of high speed schlup-schlup-schlup, like a caterpillar on fast forward, and it’s eerily quiet and solitary to be in the midst of that sound. I love it. I also love the heat that bounces off the wall of Glasnevin Cemetery, even at 11.30 at night, if it’s been a warm day. Did you know that poet Gerard Manley Hopkins lies there? So does Jonathan Swift, and Brendan Behan, along with the usual round ’em ups of Irish history – Devalera, Collins, Pearse, Daniel O’Connell… They must have either great parties or seriously boring yakkfests. Now what had this to do with running again?

Boorish, thick-fingered and brilliant, this man died the month after I was born in October ’67. My sensibilities were formed in rural Cavan, a grey Monaghan stone’s throw away. Yeats had the little people, but Kavanagh had the muck. When I now read that great man’s words, it seems as though he walked the lanes just a short bend ahead of me. Nothing is ever constant, but the moments he captured a generation before mine resonate deeply in me. They can bring me directly to a simpler time 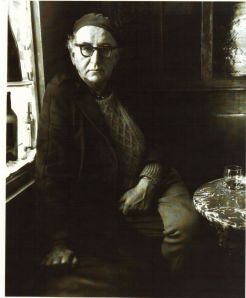 I witnessed when I was growing. From the 1970s we were hurtling into the future, but looking back maybe we were doing so with two feet in the past. I remember visiting cousins in Donegal before the rural electrification scheme had reached them. It always seemed quite cosy to be going to bed by Tilley lamp. I can remember too other cousins in Cavan getting the colour telly in. My God! Dan Tanner’s car in Vegas was red! And his denims were blue! I was enraptured, but I’d have to wait until August 1979 before the ‘colour’ reached our house. Thank God for his magnificence Pope John Paul II! We’d lived in monochrome until the Popemobile sashayed into town in a riot of colour (mostly Vatican yellow and white, it has to be said, but everything hitherto had been black and white, so we were transfixed anyway.) Come hell or high water, by Jesus Mam was going to see JP 2 in glorious technicolour. Fine with us, Mammy! Anyway, Kavanagh didn’t have Vegas on colour tv, but he had a Christmas Childhood, breath plumed by frosty starlight, calves born in the wee hours in cosy, hay-smelling byres and he had a love and a hate for his loam-clogged boots. He got the point of a whin bush, and so do I, even yet when I’m cast adrift in a metropolitan landscape of constant bustle and no darkness and nothing but foxes to tell day from night.

Luke Kelly and the Dubliners give a great rendition of his words here.

The Coen brothers have made by now an impressive list of fine, fine films. Thoughtful, different and engaging. Always ultra-professional productions. You might choose Miller’s Crossing over Barton Fink, or claim that Fargo was wayyy better than The Big Lebowski, and nobody can argue really. For me, it’s their second one that is the greatest. A perfect little gem of hilarity that ought to be the textbook for how to write a proper screenplay. No wrong note, funny as Mother Teresa in Paula Radcliffe’s running vest and perfectly, perfectly cast. Yes, that includes Nicolas Cage. He’s not wrong in everything he does, you know. I’ve seen it somewhere between 25 and 26 times, and hopefully some more too. I can’t believe this was 21 years ago.

Can’t explain this. Don’t want to anyway. If I see crows flying in any kind of appreciable numbers, my heart skips and I cannot suppress a smile.

I’m not techie, but I am an utter Mac snob. I love how it goes about its business and how dang fine it looks even when it’s asleep. I can’t understand why anyone uses a PC. Just don’t get it. But I’m not sure I want everyone to have one of these swift beauties either…

Tell us some stuff what floats yer boats, peeps…

The most beautifully titled Raptureponies

The mother on the hill: Sesame

By the seat of her pants: Chris

By the light of the moon: Jo the Mama

Have at it, me hearties.