Don’t gimme that. My needs are way
more special than you.

Oh yeah? You got a mortgage repayment on the tenth? A family to feed? A hallway skirting to paint before the carpet guys come? 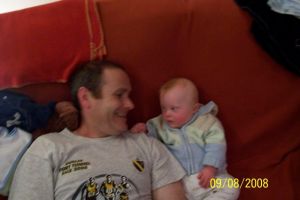 Hah! Thought not. Shuddup then. 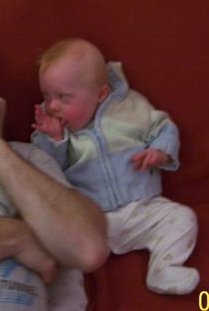 So. You got any caca in your pants?

Thought not. I win.

If you don’t laugh you’ll end up crying. A cliché only gets to be one because it’s true. And this Down Syndrome business is serious enough to need a good laugh. Other people need wheelchair-accessible cars or guide dogs or have chronic asthma or a million other circumstances to mark them out as special, but to them it’s just life. Downs is a reality in my family’s life. And laughter is still needed.

One of the small ways that humour pops up for me, totally uncontrollably, is when other people, who have no abnormalities to deal with and no real experience of special needs, put their foot in it. It’s not their fault if they inadvertently give thanks to God (and to me) that all their children are ‘normal’ and then realise that our Jacob isn’t quite the same, but a tiny smile will crease my face when they do. It’s not being mean, not really. It’s just that Downs isn’t a bogey word for me. I have a grip on it, if only in the last four months. People don’t need to blush and want to apologise for their faux pas. It’s ok. I’d do the same, I think.

But laughter can stir up plenty of heated debate. Take Tommy Tiernan’s most recent stage set, Bovinity. Tiernan is an observational comedian who has had his fair share of controversy over the years. He also does great work for Down Syndrome Ireland, but when he used that experience in his stand-up routine oh boy did he get a backlash. Here’s Ed Power, writing on November 27th, 2007 in The Irish Independent.

The most uncomfortable moment, though, is at the end, when he impersonates a person with Down’s Syndrome. Introducing the segment, Tiernan explains that he participates in charity work for Down Syndrome Ireland — apparently he believes this gives him licence to laugh at disabled children. What follows is crude, cruel and, above all, unfunny. If Tiernan’s purpose is to jolt his fan-base out of its Friday night comfort-zone he has certainly succeeded.

Now you’ll have to find out for yourselves if this kind of thing offends you. I had a look at his comments on the DVD copy Dee got me for Christmas. He does indeed affect a Downs voice. He talks about how direct Downs people are, makes a joke based around the old name of Snickers (he was running the marathon in aid of DSI), goes close to the edge when suggesting that people who have DS would make great drug smugglers and generally confronts the visible reality of Down Syndrome. I can understand the anger that some people feel, and it is entirely legitimate, especially as they rise to defend someone who may not be able to defend themselves on the same platform. Yet TT doesn’t strike me as condescending or cheap. There are easier ways to get cheap laughs that making people take painful looks at themselves and their reactions. Anyway, draw your own conclusion. Suffice to say that it got a smile out of me but ultimately, I’ve heard better material from you, Tommy. I’m still enjoying more the fumblings of the people who put their foot in it and try to back out, but I’m certainly not going to pillory a comedian who shines an objective light on any group in our society, Down Syndrome included. Keep on truckin’, Tommy.