‘Get off those stairs!’

‘Do NOT pull
your brother’s hair!’

‘Christopher’s all threw clothes Who floor over the?’

‘What do you think you’re doing
on the back of the sofa, young man?’

‘Get off
those stairs!’

‘When Andrew sees
what you did to that jigsaw
you are dead meat, mister.’

‘How did you
get in THERE?’

‘GET OFF THOSE STAIRS
THIS MINUTE!’

Oh dear. I think we’ve gone and integrated the littlest one.

So I’m in the office at home, working away, and after oh I dunno, ten minutes the repetitive sound finally manages to get my attention. ‘Hello, puppy calling do you want to play with me?’ Another Vtech chart topper in the endless hit parade of drives-you-demented ditties that they have.

There are two standard voices that come with Vtech toys, the English one and the American one. Both of them are unhinged. The English one comes with an absolutely impossible pertness from a cheerful school of elocution that has NEVER existed outside of the minds of directors of pertly cheerful British war movies from the forties. You wonder how many fluffy woodland creatures had to suffer to counterbalance this sheer evil naiceness.

The American one sounds like it’s been sleep deprived and force fed pure sugar for days and is GOING TO MAKE YOU CHEERFUL IF IT’S THE LAST THING I DO! Smile with me!!

But I’m going mildly off topic. I’d been at my desk, remember. And after ten minutes of the insanely happy ‘Hello, puppy calling do you want to play with me?’ I wondered why Jacob was being so quiet. This was what I saw outside the office door.

Move round to the side and you see where the insane jollity was coming from.

He slept that way for ages! Hard pillow, crap soundtrack, he didn’t care! And if you look close, you can see the marks on his face from pushing the big Vtech button.  We all got scarred by Vtech, although I think they’re mostly disappeared.

Course, the mental anguish you go through never really leaves you, does it? Fellow sufferers know the insane stare. They’d sympathise if they weren’t already driven to distraction. All it might take to push them over the edge is to whistle a tune from the First Steps Baby Walker.

I’ve seen the unwitting mums, pushing it on their kids. It tears families up, maan. And woe betide you if you mix it with alcohol. It might seem funny at midnight, but at seven a.m. Satan’s sour refrain (You know it. It goes ‘Hello, puppy calling do you want to play with me?’ over and over and over again) will steal your very soul. (Now alternatively that could be a Christmas party hangover, I will say. The results aren’t all back from the lab.)

Have a Vtech Christmas everyone!!! 😦

Stop press: The following giant baby has been spotted terrorising the lower-lying levels of a suburban house in north Dublin. 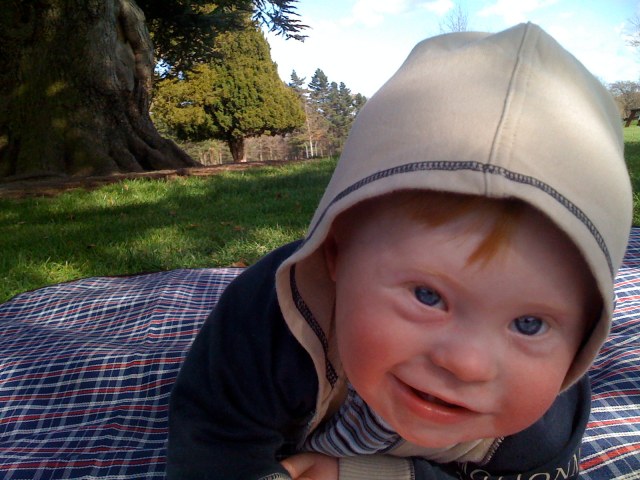 Do not approach giant baby!

Deceptive smile will lead to vicious dribbling. Reports of gleeful hair pulling cannot be confirmed but make no mistake, this rapid moving critter is leaving a wake of destruction in his, er, wake. You have been warned.

Seeing as nobody else is doing anything about bringing the glorious minute-by-minute news of me to you, my fashion-starved friends, I’ve once again had to take control of the the entire internet to update you all. The world is in imminent danger of economic ruin and unimaginable collapse, it’s true, so why not check out my big white boots? 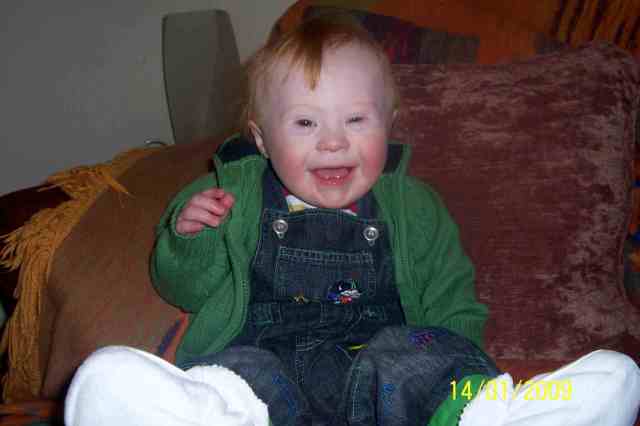 Aren’t they cool? And has anyone ever shown a pair of dungarees how they should be worn more successfully than I do? That’s right, they have not.

I admire you for your intelligent and insightful analysis, all of you. I totally dominate the camera. And the catwalk. Not so much catwalk as crawl perhaps, but I wouldn’t be the first supermodel not to be able to hold themselves upright on a given day, would I? Heh heh. Oh listen to me! Who am I to fire cheap shots at a much maligned segment of society? Forgiveness!

And just in case you think I can’t act up with the best Naomi Campbells and Kate Mosses, check me out here after I fell off the bar stool at some after-show party in Kensington last week. (I’m posting it here because that way I have some degree of control over those infernal paparazzi, and because I can trust you good people not to tell everyone else.)

Ha ha ha hic! Shares in me are on the floor!

Ha! Fooled you. I hadn’t been drinking at all! I was just stress testing the furniture round these parts. Something tells me it’s going to get a lot of testing. And stress. What do you think of my mechanic chic?

Ooh… be two weeks before we get a replacement for this gasket, love.

Ok, enough of the small talk. I have actually been working too, you know. Apart from now pretty much owning the downstairs and forcing the Big Ones™ to actually sweep/clean the floors every so often, I have also started talking. Whole sentences. (Oh, have to tell you this one. Stubbleyman, in bed a couple of days back, was trying to squeeze those last 15 mins out of the cosy duvet, or comforter, for you up-and-at-em Yanks among my clearly superior and discerning fans. Normally I’d just be awake, wondering if they’d ever feed me again and yakking my stream of consciousness babble, right? But just to throw it out there, I decided to say I wanted to be fed and forthwith if you please, my good man. I think ‘More nam nams‘ was how it came out, or possibly even ‘Mah nam nam‘, but you catch the drift. Man! He was out of the bed like a ricocheting knife off Herself’s week-old lasagne. I think he dislocated his gossip bone in the race down the stairs to tell Herself about the genius they’re slowly realising that they got lucky with. Wish you coulda seen it. Oh yes, I have finally discovered the secret of the guilt trip, and by golly I’ll be exploiting it.)

I’ve also seen fit to let them know that I am fully aware of where their noses are. Well if they’re silly enough to ask, it would be rude of me not to answer by honking good and hard on said proboscis, no? I’m just about beginning to do the hug thing too, but I’m not sure they’re ready for it yet. Whaddya say, Elbog?

They’re also starting to annoy me with flash cards and repeating words over and over again. What a pain. If I say ‘Ball’ back to them do you think it’ll make them go away? Or will they just harrass me more? What should I do, gentle readers?

Seems that while we’ve been blogging, Jacob and I, the cyberbell has been ringing and a neat queue has formed at the door. The lovely India Knight has linked to us at The Times Online and now we’ve been caught napping. 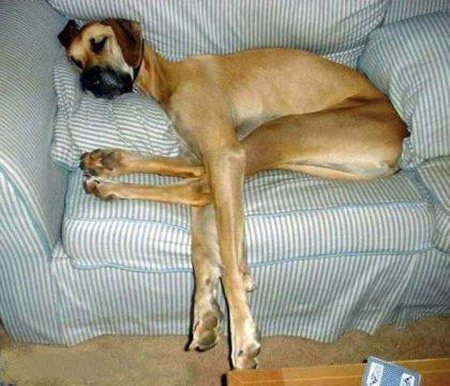 This blog hasn’t had a lick of paint in forever, Jacob’s been hopeless at encouraging me to post new info, he hasn’t written a sodding thing himself since he turned fourteen months last week and now we’ll really have to organise our shoddy categories so people can muddle around in a vaguely not lost way. And as if that wasn’t embarrassing enough, these aren’t even my best y-fronts.

Ach so what! This is us, you’re most welcome to our place and don’t worry about the snow on your boots.