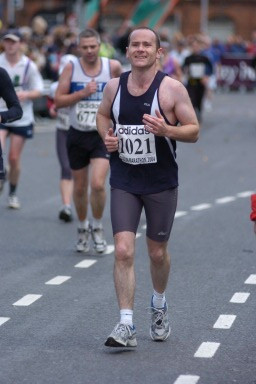 Today I didn’t run the Dublin City Marathon. I didn’t come in under four hours. I’m not bruised and sore. I didn’t get the endorphin rush that comes with scraping over the line and I didn’t raise a shedload of cash for Down Syndrome Ireland and St Michael’s House. Gah! I didn’t get to look like this bundle of pent-up energy from four years back. And what an unstoppable force he is. Coiled tight like a… like a dishrag.

So no marathon 08. The writing was put on the wall back in summer. Tuesday 22nd July, while I was visiting my father in hospital, I got a phone call. He’d just had a quadruple bypass. Last thing he needed to hear was how my employer of fourteen years was closing down and laying all the staff off. I didn’t especially need to hear it myself. Luckily (for Pops at least) my guardian angel had conveniently arranged for me to leave my phone on the driver’s seat of the car on a dodgy side street, in full view of every pigeon-necked shoe-shuffling skanger in Dublin 7.

Well done Archangel Nokia. Because of you Dad didn’t get to have a pained reaction and wander off towards the light as he watched me take that phone call. And it also meant that I had a car seat under my ass when I got to hear the news.

We were given six weeks.

It’s hard to quantify the feeling. It felt like a chasm had opened up beneath me. No, not opened up. Revealed itself. A big, grinning maw of spikes and jagged rocks far below that had always been there, but fourteen good years on the front tit kept me from seeing it. Well it was there now, and it would never not be there again. The grip of friendships felt suddenly tenuous. The long cycle up the road to home (our suddenly threatened home) made me feel that every single neighbour knew my shame and inadequacy, and was secretly indifferent. Nobody had any idea, but that didn’t stop me from feeling intensely watched. First there’s a paralysis, then there’s a frantic burst of misdirected energy and all the while there’s a feeling like the world has gently fallen away and you’ve got too much caffeine in your system. We’ll lose the house! What the hell’s going to happen with the kids? They’re babies! Jacob can’t look after himself HE CAN’T LOOK AFTER HIMSELF!!

It takes a lot to make me lose sleep. But I lost sleep. With spectacular timing the builders had just started the attic conversion, so we were all homeless vagabonds crashing in the houses of whichever family members were on holiday right then. Jacob had just been discharged from hospital, Dad was starting the slow road to discovery and I was standing on a tightrope high above it all. So marathon training kinda came undone at that point.

My apologies to those who pledged and gave cash and to those who offered me such good encouragement. A plan is being formulated and the roads will not be safe from me for much longer. And the rest of this story is already on the boil.

Yes, the news you’ve all been waiting for! After a ten day period when I got absolutely NO running done I managed to squeeze in a quick twelve k today! Yes yes, I know! It’s wonderful! You may cheer and rejoi- Excuse me? You don’t give a hoot about my running?

Be like that. It doesn’t really do you justice as your mothers would’ve hoped. But if you insist on looking for more news then I suppose I could throw out that JACOB CAME HOME TONIGHT!!

He lay stretched out on Christopher’s bed at story time, looking at the poster of pirate flags, as Chris and Andrew tried to find Wally (Waldo to the US crowd) and everything assumed a delightfully normal chaos once again. Let us hope that it lasts. 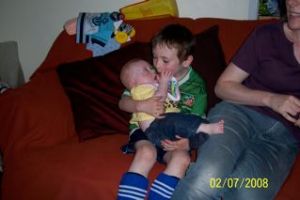 There. That was easy.