We’re hanging in space. Nobody knows which way up is. Back there in time, before you or I had to concern ourselves about it, somebody decided that it would be easier to standardise the setup. Make North the up, and South the down. They knew that they were bullshitting, of course, because they were the ones who decided to do it. But that bullshit was predicated on the reasonable assumption that order from chaos was a good thing. It would allow things to be arranged in some sort of sensible order. The 123 from Griffith Avenue to Inchicore would, by and large, have a timetable and stick to it. And sensible order is a good thing, so long as you don’t go asking too many awkward questions.

So as we hang here in the vastness of a space with no imaginable edges, the Arctic is at the top, the Antarctic is at the bottom, Florida is on the left and Bangalore is on the right. Greenwich is in the middle, because it was their game so they got to set the rules.

But bear in mind that it’s entirely arbitrary. Not only are we spinning in the unknowable mystery of space, which in itself is a truly wonderful thing, but we’re unquestioningly accepting somebody else’s version of what makes up, and what makes down.

We go along with these arbitrary rules every single day of our lives. Society depends on them if it’s to work. From traffic signs to garbage collection, we need them to keep sentinel and guard us against chaos. And chaos, dear First World chums, is never as far away as our sheltered existence might lead us to believe.

But they’re not perfect, our rules. They’re made up. We need to go along with them to make them work, but that is not the same thing as accepting them blindly or adhering to their every command. The polar bears do not live at the top of the world. The penguins do not live at the bottom. We choose to decree that they do. For their part they do not give a permafrosted shit one way or the other.

Things are as we perceive them to be. It’s a lesson I’ve learned over the four years since the great universal being allowed Jacob to live with us. There is no slow. There is your speed, and my speed, and his speed. And the person who is certain of too many things, I’ve stopped envying them a long time ago. I’m blessed to have a child like Jacob, whose make-up is different to mine in some respects, but who nonetheless has made me look at the order of things, question it, consider its merits, argue its faults and never, ever see it the same way again. I can’t be thankful enough for that. 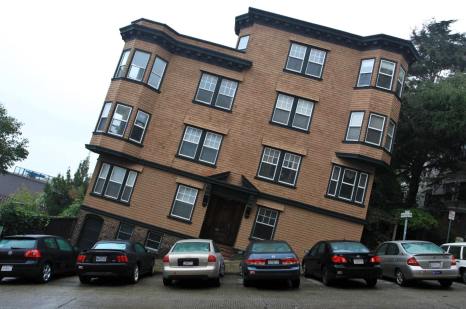 A crazy house in San Francisco. Or is it? Click for reality.

One comment on “The polar bears do not live at the top of the world.”