It’s easy to be shocking. Some people make a life’s habit of it. We’re taught in my business (advertising) that if you shock people, you’d better have a good, justifiable reason. If you don’t, you lose your potential customers’ trust pretty quickly. 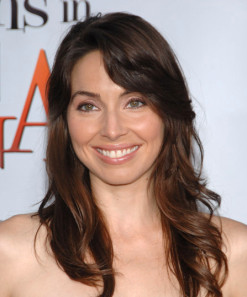 That’s the bit that kicks me in the nuts. All this going for her, and she can ‘jokingly’ tell movie director Quentin Tarantino that he’s ‘produced more retarded things than Sarah Palin’s vagina.’

Did you think this was a joke without victims, other than Tarantino, Whitney? Truly?

The Roast, as it’s called, is an American convention where terribly successful and famous people are publicly shredded, mocked and humiliated by their friends, with their compliance, in the name of comedy and entertainment. And flawed as that sounds, the usually rude results, if you want to YouTube any, can be quite hilarious.

Not the beautiful Ms Cummings’ contribution however. It happened towards the end of 2010 at a roast for Tarantino. Personally, I feel that Sarah Palin can expect to get harpoons thrown at her. She’s a public figure with her own politics in a nation that’s sharply divided on left/right grounds. It will happen. But what should not be allowed to go unanswered is the deliberate targetting of her son – and her whole family, essentially – as if the hollow laughter was somehow a right that free speech confers on idiots like Whitney Cummings. There is a price, you cheap-laughs-barrel-scraper. For you it’s a dipping in the minds of decent people. Not prudes or unsophisticated types. Just decent people who stand a bit closer to fairness than you do, clearly.

For our special needs family and friends, it’s inevitably another target painted on their backs that makes them somehow, ridiculously, fair game for the spite and cruelty of others, you beautiful, senseless fool. And I hope to God you’re a senseless fool, because otherwise you’re a cruel and intelligent doll who sees no merit in our wonderful children, other than as a handy punchline in a mockery of all that drags us, even one miserable half inch, up from the dirt where conscience or respect or feeling for our fellow creatures plays no part. This life is already hard enough without your outstandingly ill-conceived dig at people who, on the face of it, are less fortunate than you.

But you know what, Whitney? On the face of it means nothing. On the face of it means Whatever Happened To Baby Jane and Sunset Boulevard and every other intelligent analysis of skin-deep shallowness. You have no concept of the love those ‘retarded things’ bring to the people whose lives are graced by them. To me Sarah Palin lives an unimaginably alien life, except for the bit where Trig puts his arms around her neck and loves her. I know that. And it is clear as thundering fuck that you do not.

Here is a reference for those damn statistics.
Here is some information on the music, by a group called The Unthanks.

And a thank you never made often enough to the McGivney family, for being who you are and keeping things real. 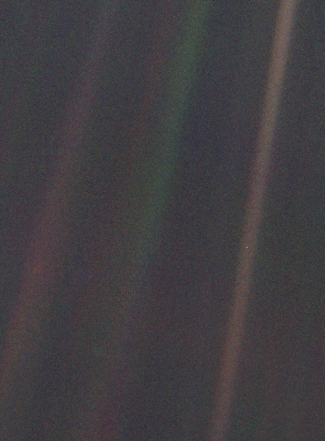 Look at the beam of orange light towards the right side of the picture. A tiny bit further than halfway down, there’s a speck. Don’t try to brush it off. That’s home, when you point your camera at Earth from 3, 762,136,324 miles away. It was taken by Voyager 1 just before it travelled beyond the edge of our system, sometime in 1990. Carl Sagan, genius astronomer and astrophysicist, wrote about it with much more penetrating elegance than I could.

‘From this distant vantage point, the Earth might not seem of particular interest. But for us, it’s different. Look again at that dot. That’s here, that’s home, that’s us. On it everyone you love, everyone you know, everyone you ever heard of, every human being who ever was, lived out their lives. The aggregate of our joy and suffering, thousands of confident religions, ideologies, and economic doctrines, every hunter and forager, every hero and coward, every creator and destroyer of civilization, every king and peasant, every young couple in love, every mother and father, hopeful child, inventor and explorer, every teacher of morals, every corrupt politician, every “superstar,” every “supreme leader,” every saint and sinner in the history of our species lived there – on a mote of dust suspended in a sunbeam. The Earth is a very small stage in a vast cosmic arena. Think of the rivers of blood spilled by all those generals and emperors so that, in glory and triumph, they could become the momentary masters of a fraction of a dot. Think of the endless cruelties visited by the inhabitants of one corner of this pixel on the scarcely distinguishable inhabitants of some other corner, how frequent their misunderstandings, how eager they are to kill one another, how fervent their hatreds.

Our posturings, our imagined self-importance, the delusion that we have some privileged position in the Universe, are challenged by this point of pale light. Our planet is a lonely speck in the great enveloping cosmic dark. In our obscurity, in all this vastness, there is no hint that help will come from elsewhere to save us from ourselves.

The Earth is the only world known so far to harbor life. There is nowhere else, at least in the near future, to which our species could migrate. Visit, yes. Settle, not yet. Like it or not, for the moment the Earth is where we make our stand.

It has been said that astronomy is a humbling and character-building experience. There is perhaps no better demonstration of the folly of human conceits than this distant image of our tiny world. To me, it underscores our responsibility to deal more kindly with one another, and to preserve and cherish the pale blue dot, the only home we’ve ever known.’

It seems foolish to hate someone because of the colour of their skin, or how they get on their knees to pray, or who they want to love, or whether they’re going to need more time to catch up because they’re slower at some things. Yet we continue to do all these things, these things that sap the tiny battery that we each are given, and are beyond fortunate to get.

I’m an advertising copywriter. I write ads. Radio ads. Posters. TV ads. Stuff on websites. Cars. Lawnmowers. Toothpaste. Tomato ketchup. It’s a very self-absorbed world most of the time. Sometimes we fool ourselves that what we do isn’t just selling stuff: it’s art.

Or let me say almost never. Sometimes, some incredibly rare, uncynical times, people like me can actually transcend the grubby little sales messages behind most of what we do and reach our fingertips just a bit higher, to touch the place where the fairy dust gathers on the highest shelf. The people who put the ad below together did that. They had outstanding material to work with, granted, but they did their homework and they put together an advertisement, on behalf of one of the biggest companies in the world, that reflects something good and true, and for this one time only I do not feel like I can see the sales message behind it.

I’ve woven myself a little tale, that the better natures of everyone involved with the advert slipped free from the boardroom and the creative department in the ad agency when they were touched by the pure, driven love of Kerry Hincka, Molly’s mother.