Yeah I know, it’s a truly awful headline. But I likes a pun, see, and there’s a whole litter more where that came from. Sorry. (No, I’m not.)

First though, the important stuff: DSI is taking over ten greyhound stadiums on Feb 26th to raise funds at the following locations.

Tickets are €10 each, and as well as having a flutter on skinny daft dogs chasing a mechanical gizmo, you can join in with raffles, auctions and all sorts of stuff. Have a drink, have two, wake up feeling ruff next morning but hey! Better than blowing it at  the dog trac- er, yeah…

But seriously. As fun goes, there are worse ways to spend a tenner, and the wonderful folks at DSI need our support. It might seem obvious to state that we need theirs even more. So no bitching.

I’ll no doubt hound you some more on this later. With dogged determination. It will be ceaseless and without paws.

Who  needs imaginary friends? Check out the wonderful Aimee Richardson, a busy young woman who’s even got a cartoon character, Punky. (Well ok, Punky was at one time only imaginary, and lived in the imagination of Lindsay Jane Sedgwick, but she’s become pretty real in the meantime.)

Aimee, the voice of Punky 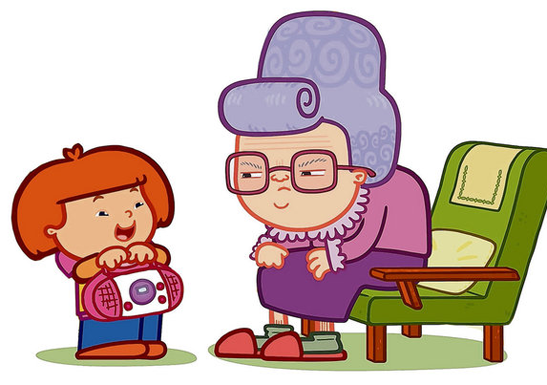 Punky, the face of Aimee

Aimee’s multi-talented, inspirational and breaking down barriers just because she’s being herself and doing normal things in normal land amongst the normals. That’s not disparaging – you know what I mean.

She was interviewed by Brendan O’Connor for The Saturday Show last night. Overlook the cringiest faux pas of the show’s host (dad to a Ds baby, btw), who’s got four left feet at times, but give him credit for getting Aimee on primetime TV. Ignore the fact that his questions are too full on and he doesn’t really give her a chance, but revel in her quirkier little orneryisms. She’s raising the bar for all of us; an inspiration for what anyone with Down syndrome can achieve.

Zip forward to 23 mins approximately to get to her segment. You’ll find it – for as long as the TV channel holds it online – here. And below is a recent article by Aimee from The Sunday Times. 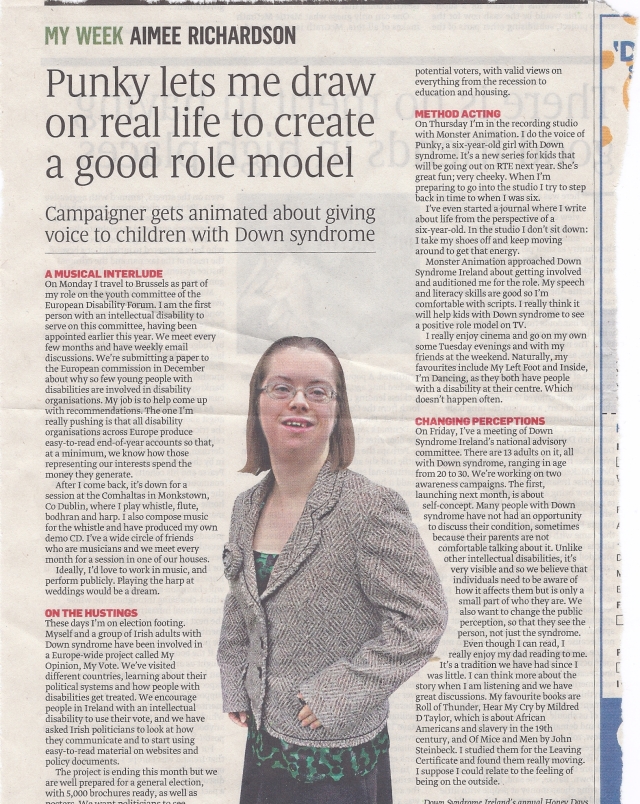 Southside Dad recently put together some interviews for Down Syndrome Centre featuring parents who’ve ‘had the experience’. If you know anyone who’s reeling because they’ve got a new baby with Downs, these might help things to slow down a bit.

Here Martin and Deirdre, both first time parents, talk about their memories of the new arrivals.

You can also see them over at Southside Dad’s blog.

Adman Dave Trott recently brought the story of photographer Robert Capa (1913-1954) to my attention. The opening sequence of Saving Private Ryan (some here) is often cited as the best war ‘footage’ ever shot. The WWII D-Day landing was recreated here in Ireland, on a Wexford beach, but you’d never know that. Its realism is stunning, and it’s all based around photos shot by Capa. He took 108 pictures in all, and he went through hell to get them.

His was one of the first landing craft to get torn into by heavily fortified German gunners. 100 long yards from shore the soldiers had to disembark and face near certain death. Ramps came down and they jumped in to wade ashore, with nightmare, heavy strides. Capa somehow made it and took as many pictures as he could before dragging himself onto the first available landing craft that was returning to sea and safety. He made it back alive from the unforgettable butchery on Omaha beach with three precious rolls of film that he had risked everything for.

Back in London he took the film to the offices of Life Magazine, where a 15 year old lab assistant had set the drier’s heating controls too high. The emulsion on the film melted, and ninety eight of Capa’s pictures melted with it.

Here are three of the ten that survived.

Frying pan to fire. Can you imagine the anguish Capa felt when he heard the news? He’d already been through a nightmare, and suddenly 90% of the reason for it was carelessly obliterated. Then again, maybe that didn’t matter to him so much. I’m not sure what the percentage of loss was on the beach that day, but it was horrifically high. It was living and breathing and then it wasn’t.

Maybe Capa was very philosophical about it. I hope so. Because that once-in-a-lifetime opportunity was built on a much greater tragedy. I like to think that he was amazed with the ten surviving pictures. They guaranteed his fame anyway. They captured everything that needed to be captured about the horror of it all. Other people, like Spielberg, had no problem filling in the gaps.

Why do we let the little events overwhelm the big ones? I do it all the time. Mired in the details of everyday living, I don’t step back to see the whole picture, at least not enough. It’s so much easier to get mad about something petty and have a hot flush over nothing than to actually stop for a minute and be grateful. For one minute! An important resolution for me in the coming year is to try to do that. To step outside of the cares, worries and important crap that we all have to deal with, and in that minute be grateful for the moment.

Nobody owes us anything, and yet we all too often end up with a damaged or frustrated sense of entitlement, when really the odds of us ever being alive are so phenomenally slim that we should spend 24/7 in awestruck amazement. Never mind running water and a roof and bin men who collect the rubbish every week: that this tiny little ball in a tiny little solar system in a third-rate galaxy stuck out on the edge of nothing should have managed to produce the conditions where we could come into being, enjoy the air and the sunlight and the taste of vanilla ice cream and the feel of warm grass underfoot and the gift of communicating with each other on an emotional level is AWESOME!

But we don’t think about it so much. The mortgage or the school report or the visa bill or the fighting kids or the sciataca or that stupid neighbour who did that thing that you’ll never forget just get in the way.

So when I read the Robert Capa D-Day story, it got me thinking instantly about Jacob. Outsiders often think that he’s missing something huge. That a whole bunch of his photos just won’t ever come out. But every day he makes me see the big picture. It vanishes too quickly, whenever his brothers start to argue like howler monkeys over the Wii, or something goes wrong at work, or we argue, but it still happens. The ten photos that our Jacob has developed are extraordinary. Each one of them IS the big picture. And having him here to slow down that minute and prod me into savouring it is where I get the lucky break, and the people who feel like we got massively, randomly unlucky are missing the point.

Jacob’s mam tried to gently correct a kindly, misguided, sympathising old lady in town just this Saturday, ‘Oh, he’s not any kind of cross to bear at all, really, no.’ But she knew that the old lady didn’t understand. I suppose that’s what happens when you think all your photos got developed.