Thank you most humbly, His Girl Friday, for posting this. It’s great to see your collection of quiet wisdom back in full flow.

A Chinese woman had two large pots, each hung on the ends of a pole which she carried across her neck. One of the pots had a crack in it while the other pot was perfect and always delivered a full portion of water. At the end of the long walks from the stream to the house, the cracked pot arrived only half full.
For a full two years this went on daily, with the woman bringing home only one and a half pots of water. Of course, the perfect pot was proud of its accomplishments. But the poor cracked pot was ashamed of its own imperfection, and miserable that it could only do half of what it had been made to do. 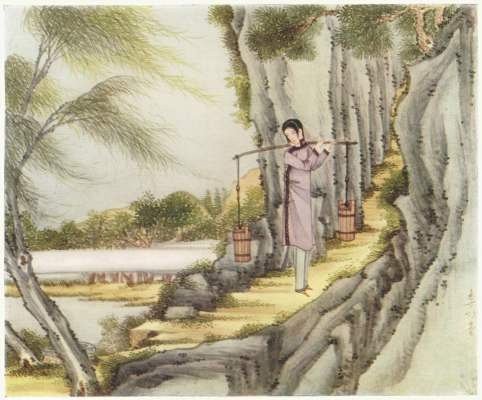 After two years of what it perceived to be bitter failure, it spoke to the woman one day by the stream. ‘I am ashamed of myself, because this crack in my side causes water to leak out all the way back to your house.’
The old woman smiled, ‘Did you notice that there are flowers on your side of the path, but not on the other pot’s side? ‘That’s because I have always known about your flaw, so I planted flower seeds on your side of the path, and every day while we walk back, you water them. For two years I have been able to pick these beautiful flowers to decorate the table. Without you being just the way you are, there would not be this beauty to grace the house.’

Each of us has our own unique flaw. But it’s the cracks and flaws we each have that make our lives together so very interesting and rewarding. You’ve just got to take each person for what they are and look for the good in them.

Do drop in to see His Girl Friday. She’s always got the kettle on for highway stragglers.

It’s easy to get defeatist when you’re surrounded by negativity. It’s easy to add to the heap. But every so often you get to see a video of a guy who likes to order ingredients for Japanese recipes off the internet and you suddenly think to yourself that maybe Satchmo was right. It is wonderful.

My very good friend Caley brought a story from the US to my attention today. It concerns Deborah and Ariel Levy, a couple who, having been told that their child did not have Down syndrome, carried on with the pregnancy only to discover that their daughter did indeed have Downs. A doctor at the Legacy Center for Maternal-Fetal Medicine in Portland, Oregon, had ruled it out. Here’s what Oregon Online has to say about it.

But within days of the birth of their daughter, the Southwest Portland couple learned the baby did have Down syndrome. Had they known, they say, they would have terminated the pregnancy. Now they’re suing in Multnomah County Circuit Court, seeking more than $14 million to cover the costs of raising her and providing education, medical care, and speech and physical therapy for their daughter, who turned 2 this month. The suit also seeks money to cover her life-long living expenses.

Now forgive me if I come off as trite. I don’t mean to. I have some small experience of the gunk you get when Oops!yourbabyhasDownsyndrome! goes into your ears and zings around your suddenly utterly empty mind, bouncing off the smooth walls of the place where you used to be able to do things like thinking. Thoughts did assemble at some point, but I remember distinctly… no, lemme be sure… Yes, I categorically remember that at no point did I think WOW! THIS HAS TO BE WORTH FOURTEEN MILLION!

The Levys declined to be interviewed. Their attorney, David K. Miller, said the toddler is as dear to them as their two older children but they fear being perceived as “heartless.”

Oh you think?? ‘Babba, you’re just as dear to us as our other two kids, but somehow we reckon it’d have been worth fourteen million dollars NOT to have had you. We sure hope you’re okay with all that. Later on, like.’

“They feel very strongly that what happened to them was wrong,” Miller said. “They were given incorrect information, and their lives have changed because of it.”

No doubt there are thousands of tears and a whole lot of emotional heartache gone into the legal decision for the Levys. I do not care. You made a bad call, guys. A shameful call. You could bring a lot of honour on yourselves by admitting that and getting the hell on with the randomness of life as it’s been laid down for you, for me and for every other person on the planet. What court in man’s remit has the moral right to give you $14 million compensation for a beautiful baby’s life?

What would Bono do?

The absolutely amazing and tireless creation that is Hammie is yet again going without sleep so that Irish autism can benefit. She’s got two incredible kids with autism herself, yet despite the 27 or so hours she devotes to them every day, she also finds time to do stuff like help loads of other special needs groups like Jacob’s. Oh, and she fundraises like Billy-o for Irish Autism Action.

The latest push comes with the assistance of O2 and Samsung. For every Samsung Tocco Sold In O2 stores during the month of June, €10 will be going to Irish Autism Action Charities in your area. 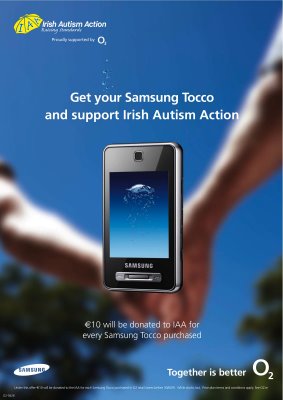 If you ARE in the market in Ireland for a smartphone, please put the Samsung Tocco on the list for consideration. And if you’re not, I’d take it as a personal favour if you could spread the message to anyone you know who might be.

If you want to find out what that support means from the perspective of someone with autism, Hammie’s blog post says it rather nicely. Please support her essential (and usually unsung) work if you can.